I am thrilled to hand the blog over to Ms. Scarlett Flame today as she celebrates her new release – The Prophecy Unfolds (Dragon Queen). Steampunk, Erotica, Paranormal, Romance – how could it possibly get better than that?. 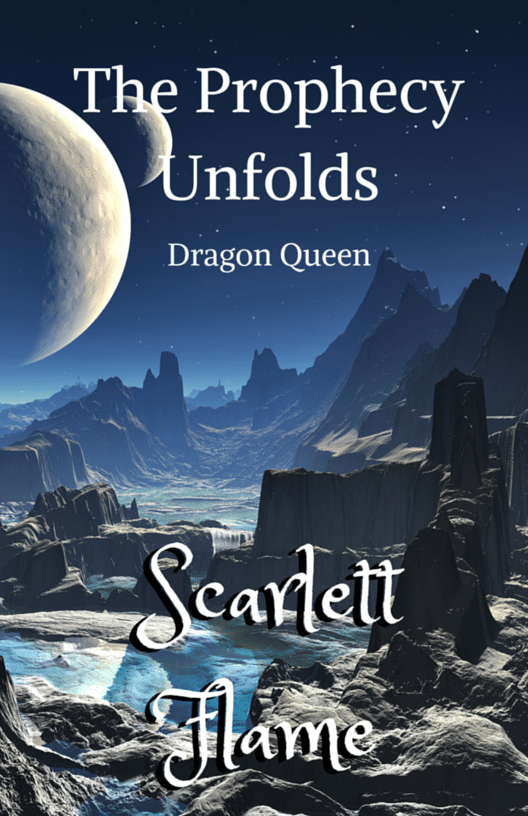 THE PROPHECY UNFOLDS
Scarlett Flame
For Alex, this was supposed to be a fresh start.
New job, new part of the country.
But she got much more than she bargained for.
As she travelled through the Snowdonian National park, with its remote villages and Wales’ highest mountains, she stops to eat a bite to eat.
There she is kidnapped by three strangers, and transported to the Dystopian, Steampunk world of Syros.
A world of dragons, magic and werewolves.
Where science fiction meets science fact.
This is only the beginning of an epic urban fantasy, and the fulfilment of a prophecy over 200 years old.
Will she survive on a planet where three factions battle for dominance.Book One of the series Dragon Queen.
FREE to read with KindleUnlimited 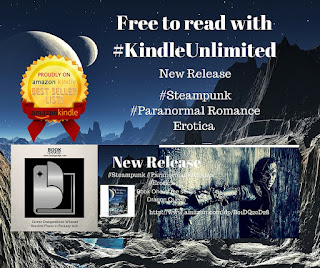 Finally, my life was getting back on track following a worrisome number of months.I had had a great deal of trouble sleeping of late as I had been constantly disturbed by dreams I can only describe as nightmares!

These dreams always included the same shadowy characters with obscure faces. The one recurring theme being, I became intimate with each one of them. To say this wasn’t in my usual nature would be an understatement.

In all my relationships I had always been monoga- 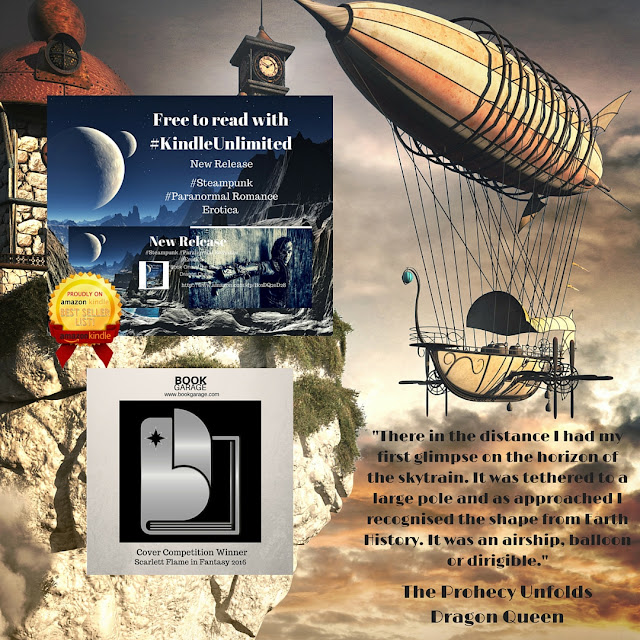 mous. A fundamentally one-man-girl, who wouldn’t dream of being unfaithful. Perhaps, because of this, these dreams proved very disturbing and included sexual acts I’d heard of, but would never think of taking part in.  Little did I suspect that these dreams would prove to be the precursor to an amazing series of adventures

This story proper, began one day driving through the glorious Welsh countryside on my way to check out accommodation procured in anticipation of my move. This would act as a base to work from Monday to Friday, at my new job

Previously I had worked in a general hospital close to my family home in Manchester. But wanted to spread my wings after ending a long term relationship with my childhood sweetheart,  Paul.

I realised that I now needed space to develop new friendships and put my love life on the back burner. My career would become my first priority. So, this became part of that plan. My new contract as a Children’s Nurse for an Agency in a hospital not far from Bangor in North Wales which meant relocating.

On that day I drove through the Snowdonia National Park where pine trees crowded either side of the road. I spotted a little picnic area to one side, flanked by a small car park. It was a beautiful sunny day and as I had brought along a packed lunch therefore I parked up to take advantage of the sunny weather. As I parked I realised mine was the only car there, but thought no more about it. I had no problem eating here at the edge of the forest.

I retrieved my sandwich, carton of orange and my book and wandered over to the farthest table. From here it was possible to watch the squirrels and birds as they searched amongst the bins for crumbs.

I’d sat there enjoying my book for about ten minutes when two things happened. First, I became aware that a hush had descended in a flash in the forest. I no longer heard the scampering of the squirrels or the birds singing. When I looked up I couldn’t see any of them around the area they had occupied only a few minutes earlier.

The second thing was a sound that I could only compare to that of the sound barrier being broken.  A whoosh, bang and a slight popping noise. Yet an instant after, the birds and squirrels returned, chirping and moving through the grass as before.

I shrugged, went back to the page in my book and continued  to eat. However, after a while a sense of uneasiness descended over me. I raised my head to find myself being spied upon.

The watcher, a tall broad -shouldered man with dirty blond hair tied at the nape. His eyes the most vivid blue I had ever beheld. I estimated him to be about twenty-five to thirty years old. He regarded me with silent intensity.  His odd clothing caught my eye. Old fashioned garments, dark trousers laced up the front, a long-sleeved suede jacket of a similar material, and leather boots

I turned my head to check for any cars or vans on the car park and jumped as I spotted two more men. One to my left and another I saw in my peripheral vision to the right. The man on the left appeared to be dressed similar to the first, but with sandy hair and sea-green eyes. 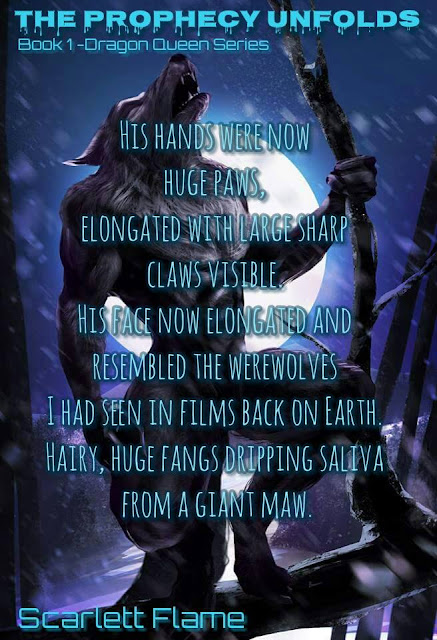 In contrast, he wasn’t quite as broad, although equally tall. All three men appeared over six feet tall. The last wore dark hair to his shoulders that hung loose, and I saw the most amazing violet eyes.

The appearance of these men with no noise, and staring at me in rapt fascination not uttering a word, spooked me. My heart began beating so loud and fast I thought that I was having some kind of heart attack.

But the most unnerving thing of all was all three men appeared familiar, a déjà vu sort of moment. I’d dreamt about these three men for so long. I knew at once these were the shady characters from my dreams.  Dreams that time after time had haunted my sleep over the last year.

I decided that sitting still was stupid, so made a grab for my bag and shot through to the right as I ran toward one of the many footpaths I’d spotted earlier.

My flight or fight response gave me swift feet, (or so I thought), but obviously not swift enough. Before I got ten yards down the path two of the three had already moved, appearing in front of me. Shifting so fast I could hardly believe my eyes. I turned to head  back to where I’d come from. Hoping to make it back to my car.

Fate once again took charge as I  ran straight into the third man, the blond. It was like running into a brick wall, as he ensnared me in his solid muscular arms. My heart stuttered, and I felt the zing of an electric current pass through my body. I never claimed to be a particularly brave person, and I hyperventilated, gasping. As I endeavoured to catch my breath.

One of them began to stroke my hair, saying “Calm down Alex, calm down. Breathe slowly we won’t hurt you.”  but, at that point my knees gave way and I collapsed into darkness, terrified.

How did that man know my name was Alex?

I came to, lay on a huge bed in a strange bedroom – the biggest bed I’d ever seen. Enormous! All that came to mind was a little rhyme my granddad used to sing  “Ten in the bed and the little one said roll over” it was so big. The other thing I noticed, was the odd lighting. The fixtures resembled gas lamps of some sort, but were giving off normal light. Candles set either side of the bed were obviously not there as a decoration as they were all burnt down with use. How strange everything appeared.

Sat on the bed next to me, to my right was the sandy haired man. To my left the one with dark hair while stood at the end of the bed was the blond. I stared in agitation from one to the other and I panicked. Terrified, I speculated wildly  What do they want with me, and where am I? I became frantic and tried to escape to the top of the bed.  As far away as possible from my captors.

The sandy haired man handed me a glass of water but I was too frightened to drink it,

What if it was drugged? I thought in shock.

The blond began to speak in a  soft distinct voice. He introduced himself as Aston, pointed to the sandy haired man indicating that his name was Leon. Finally, nodding to my left and said “Vanda”. Each gave me a slight nod, but I still couldn’t respond.

Where the hell had they brought me to, and why? How on earth did they know my name was Alex?

They continued to stare as if fascinated by me and my thoughts once again became chaotic.

I think Aston realised I wasn’t getting any calmer but quite the reverse. As I was now shaking so violently my teeth chattered. He spoke again in a slow clear voice , in such a strange accent I considered might be European. Yet his words were clear and concise.

“Alex, you need to calm down and sip some of the water. None of us will harm you.  We could never harm you, but quite the reverse. Our intent is to take care of you and protect you from now on.” 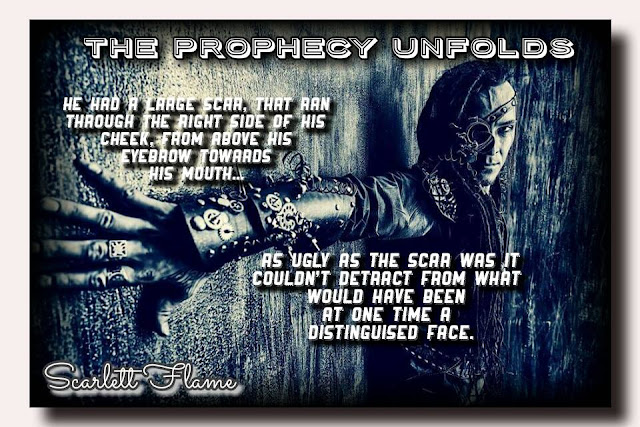 Oh oh, that was the  wrong thing to say. Now, In my head I was thinking What! and I assumed that I had been kidnapped by some foreign gang and about to be abused by them all. Not good at all. I wildly speculated.

Vanda then began to speak, “Look at me Alex, focus on me”

I turned and gazed into those beautiful violet eyes and became powerless to turn away. Mesmerised as if set in stone I slowly began to relax. My breathing more even. Yet unable to comprehend why this was happening. Wanting to look away, my body not capable of cooperating. I remained transfixed.

Aston spoke again. ”We are not on your earth any more Alex. We are on a planet called Syros in a galaxy far from yours. Do you remember a strange popping noise? Well, that was a portal opening from our planet to yours. It acts as kind of wormhole through space so we can move with ease from our universe to yours. We have been visiting your planet for millennia.”

Oh God. I thought, Now I’m in an episode of Star Wars. This can’t be happening to me. 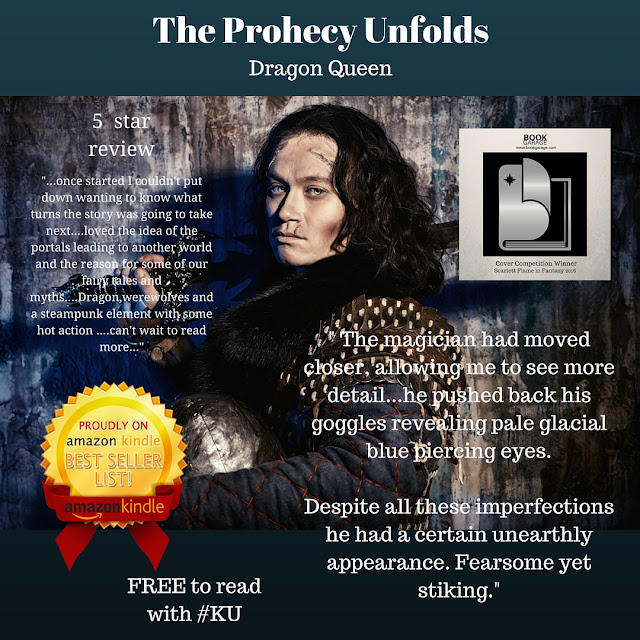 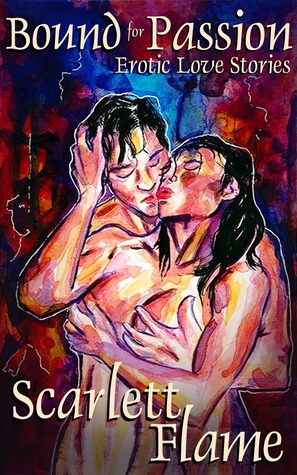 When Vivienne sits inconsolable in the hospital chapel, the last encounter she expects is a fervrent entanglement with an otherworldly being, as passions increase she learns for the first time in her life the true meaning of out of this world. In the second, Sarah meets a new lover after telling him all her intimate fantasies in an internet chat room. And, the final story concerns the journey a young woman takes, as a Dominant offers to show her the ropes, in exchange for her submission via BDSM. Individually these stories are hot, but together they are sizzling
Free from the 21st – 25th of May Worldwide

Although born in Salford I was raised in the Manchester 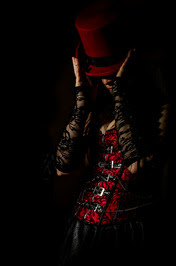 area and still consider myself a Lancashire lass.I have always loved to read and write although began to write seriously about 2 years ago. My first blog post was published in February 2013 and since then I have gone from strength to strength. This has resulted in my being voted as Blogger of the Year 2014 on the site Skelat

My debut book Bound for Passion was published in late December 2013 and already has numerous 5* reviews, which I am truly proud of

Scarlett is also organizing the Manchester Author Event and Gig 2016