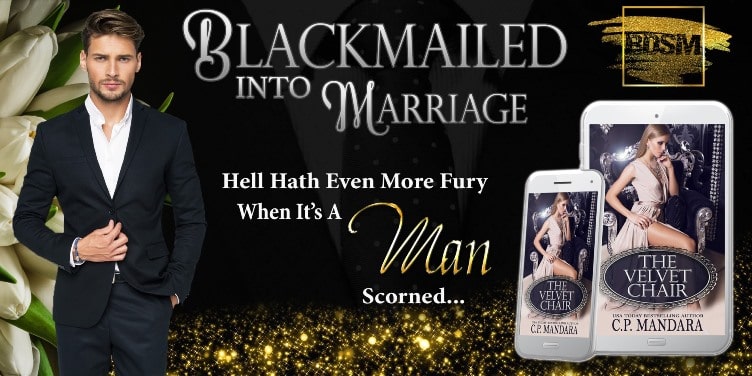 How about a little something way beyond sexy today? CP Mandara , author of the sizzling Riding School series, has a new release and I’m thrilled to help her tell you about it here. If you like dark, and you like hot, then, oh-la-la!, THE VELVET CHAIR is certainly for you.

The Velvet Chair by CP Mandara is Book One in a Dark Erotica Series called ‘Velvet Lies.’

My name is Mark Matthews. I own half of London, and the part I don’t own, I’m working on.

Life was all going swimmingly well until Michael Redcliff entered my life, demanding that I marry his daughter. Actually, swap demand for blackmail. He’s got goods on me that I want no one else to see, so for the time being I need to be his little lapdog.

I’ll marry his daughter. I’ll give him all the status, money and power he can handle… for as long as it takes me to get a divorce. You see, I can’t renege on our little arrangement – but she can. I give her a week. One week and she’ll be screaming the place down for her legal counsel. 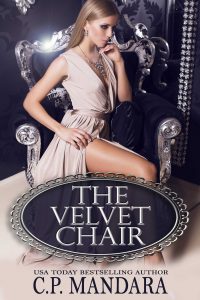 My hands were visibly shaking. Flexing my fingers repeatedly, I tried to still the tremors, but they were not to be subdued. It was hardly surprising. Today was the day I walked up the aisle and married… a monster. I was under no illusions that Mark Matthews would forgive me for what had happened, and I could hardly blame him. He’d been manipulated and sexually tortured until he could take no more, and then he’d been neatly cornered. He might have agreed to my father’s demands, but he’d come snapping and biting, feral as a wolf.

I sighed. Today was supposed to be a magical day – every little girl’s fantasy. A gigantic cathedral, a sea of flowers, a big fancy dress, and the man of my dreams. I’d imagined it would be filled with tears of happiness and protestations of love. How stupid was I?

Inhaling a shaky breath, I wondered what Mark would do with me. Having always been the sacrificial lamb in this family, today I was being sent off to the slaughterhouse. When I’d mentioned this to Michael, I’d refused to call him ‘Dad’ a long time ago, he’d laughed and told me to stop being so melodramatic. As if that made me feel any better. Dear old Dad couldn’t care less whether I lived or died, so I didn’t waste my breath trying to plead with him. All I had to do was play my part in this charade and he would be happy. I needed to keep Michael happy at all costs.

The trouble was, in order to play my part, Matthews had to trust me, and I had a feeling that trying to coax that emotion out of him was going to be almost as impossible as trying to convince the Queen of England to relinquish her throne. Matthews wasn’t the sort to trust easily, and now that I had lost what little ground I had gained with him, I would be back to square one. Wrong, I thought grimly. I was going to be at least twenty stories below square one, trying to claw my way out with nothing more than my bare fingernails. Facing up to facts, I stifled a sob. The man was going to annihilate me. 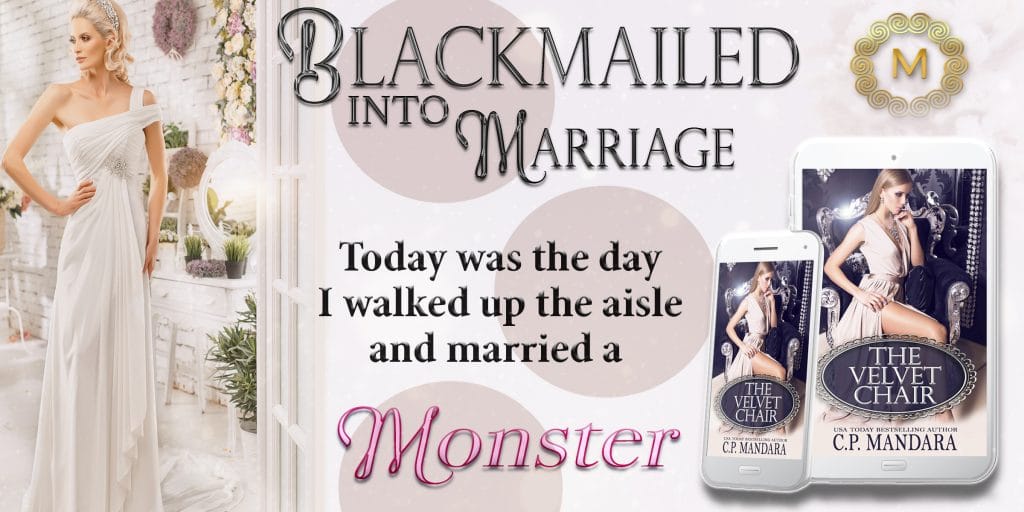 As we pulled out of the Savoy’s car park, Jennifer was a mess. I had little sympathy for her. Each heartbeat that tore through my chest was full of fire, which spat sparks and burned like acid. I was sitting next to a traitor. My body throbbed with emotion, and not the good kind.

I had to admit the dress she’d changed into, just a tiny part of the massive trousseau that was now being shipped to my estate, was rather distracting. It was designed in a glistening oyster silk that caught the light every time she moved. It was seductive enough without the two splits that ran up the side of her thighs, and when she’d seated herself in my car, revealing a vast expanse of soft creamy flesh, my blood pressure had taken a direct hit.

My temper was already simmering in a large saucepan full of resentment, but that turned up the heat considerably. I did not want to be attracted to Redcliff’s daughter. I wanted to abhor her with all that was holy. Desire would weaken my anger, and that must not be allowed to happen. I needed to have a stern talk with my overactive libido and let it know who was boss around these parts.

Little did Miss Redcliff know, but she wouldn’t be requiring clothes for the duration of her stay. I would thoughtfully be providing her with all sorts of novel uniforms, and when she began to bore me, she could just go around naked. I’d decided to train her up to be a sex slave extraordinaire, and it was going to be an exacting and rigorous process. She’d be allowed six hours of sleep a day, and the rest of her hours would be accounted for. Cooking, cleaning, ironing, servicing me, pleasing me, attending to her own personal fitness regime, and some more ‘standard’ training sessions.

Failure to comply with her new routine would produce punishments the likes of which she had never experienced. After her first misdemeanour had been dealt with, I didn’t think there would be many more. I was in bastard-mode, and the girl was going to know about it. She had just become my property and I would deal with her however I saw fit. The mark of my ownership would be indelibly printed on her soul by the time I’d finished with her. The damn woman was going to fear the sound of my footsteps, her body would shrink away from me every time I approached her and she would learn to obey my every whisper or suffer the consequences.

My lawyer had already drawn up two sets of papers, one for an annulment and the others pertained to our divorce. It would probably take all the fun out of the arrangement if Jennifer opted for an annulment, so I didn’t intend to scare her witless in the first few days, but I fully expected the divorce papers to be completed inside of a week. I just needed to push the woman to her absolute limit, and then smash her body into the next dimension. If there was one thing I was good at, it was psychological and physical torture. Okay, so that might be two things. In any case, I’d get those papers signed, sealed, and delivered back to Michael Redcliff before the week was out. Piece of cake. 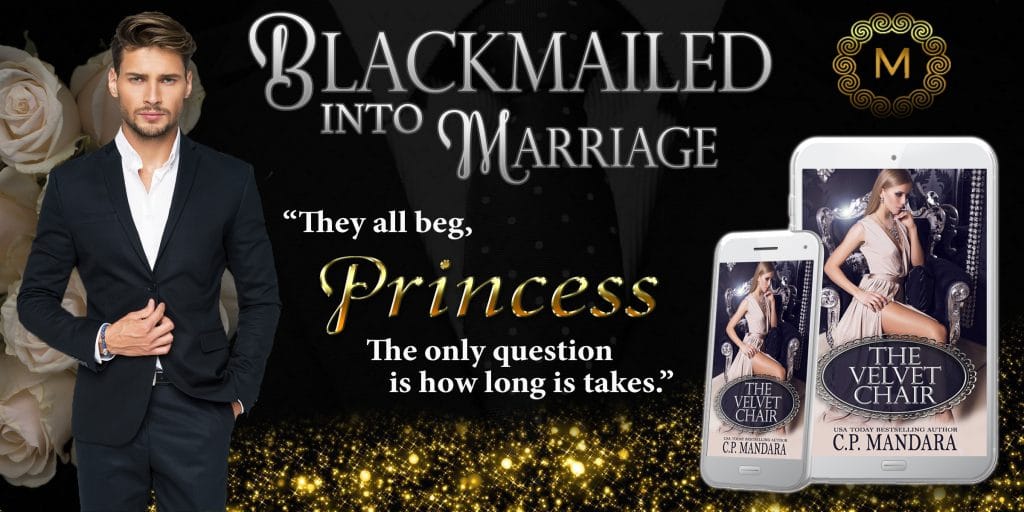 Get It On Amazon! 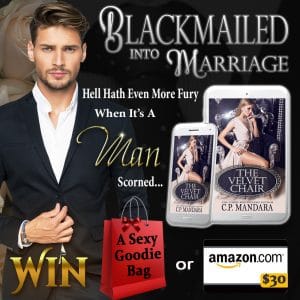 A little bit about C.P. Mandara: 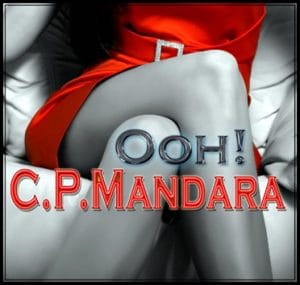 Christina Mandara is a USA TODAY bestselling author and tends to write dark romance with lashings of kinky naughtiness. Her favourite pastime is travelling, and if it involves sun, sea and… sand then it’s all good.

In her spare time she’s usually cuddled up with a good book, exploring the countryside or baking in the kitchen. In fact, she loves her kitchen so much she’s one of few woman who wouldn’t mind being tied to it! Her first and foremost love is writing, however, and more often than not you’ll find her on a laptop spinning tales of romance, erotica or dark, paranormal fantasies. 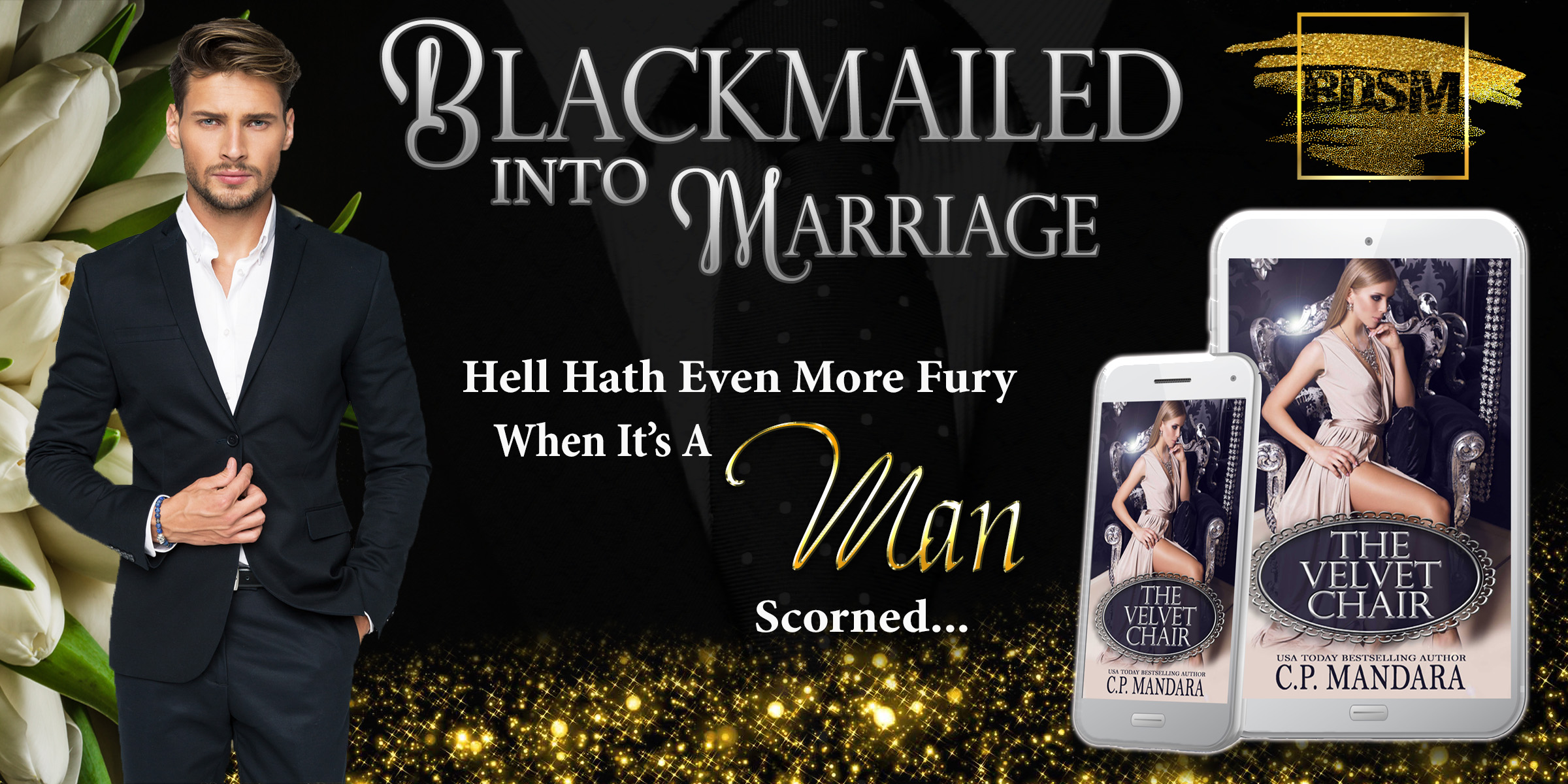 Article Name
GUEST POST -THE Velvet Chair by CP Mandara
Description
How about a little something way beyond sexy today? CP Mandara , author of the sizzling Riding School series, has a new release and I'm thrilled to help her tell you about it here. If you like dark, and you like hot, then, oh-la-la!, THE VELVET CHAIR is certainly for you.
Author
Arla Dahl for CP Mandara