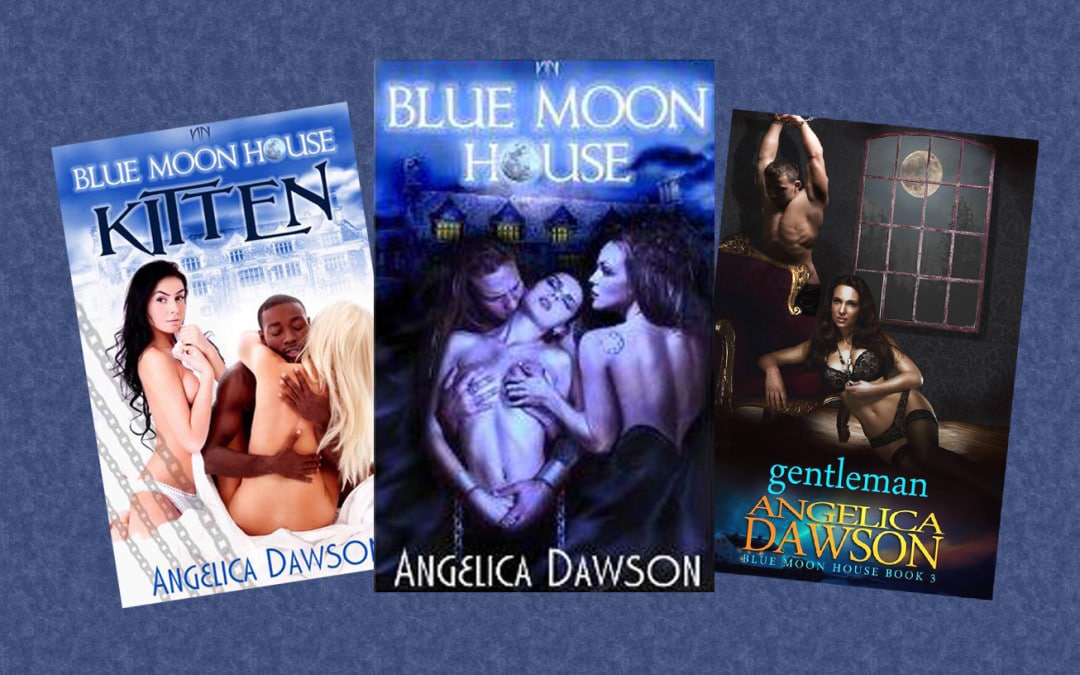 It is my pleasure to have erotica and romance author, Angelica Dawson as a guest on my blog today. She is the author of the dark and sexy vampire short, BLUE MOON HOUSE, which has been in the top ten best-selling titles at Naughty Nights Press for more than six months. In GENTLEMAN, the third installment of her Blue Moon House series, Angelica continues to push her characters outside their comfort zones and gets right to the heart of their needs.

Thank you for coming by, Angelica. Can you tell us a little something about GENTLEMAN and about BLUE MOON HOUSE in general?

Thank you so much, Arla, for inviting me to your blog. Blue Moon House popped almost full-formed onto the page. I had an idea about a woman striving to prove herself to vampires and then I couldn’t focus on anything else until I got her and her Masters out of my head. It was one of my beta-readers that suggested I write a series with one book for each of the vampires. Gentleman is special because it is the story of Harrold, the vampire who took in Julia from the first book and the reason she is in Blue Moon House in the first place. I’d dropped hints in Blue Moon House about Harrold’s (and all the other vampires’) past, so people reading this after the original will pick up those threads. The best part about writing a series of prequels, though, is that you really can read them in any order. Blue Moon House is something new to each and every main character down the line.

What inspired you to write this series?

I had been reading a lot of bad BDSM. Not that it was badly written, although some of it was, but bad portrayal of the lifestyle. So many were stories of Doms breaking the limits of their subs, treating someone they just met as a sub, generally disrespecting the person putting their safety, mental, physical and sexual, in their hands. In Blue Moon House, everyone is shown the cards up front. Throughout the series the main message is, you are not without control. You have the ultimate control. That is, the sub has the power to end anything at any time.

I find I have to work my way into a writing session by using pen and paper to jot notes or ‘write my way into’ the scene I’m to work on. Do you have your own method of warming up each day or do you get right into it?

I have gotten out of writing daily, I’m sorry to say. I had a real slump in 2014 and did next to no writing at all (Gentleman had been submitted in late 2013). I’m using a lot of tricks to get myself back into it. The primary one is picture prompts. Tantalizing Tuesday and Flasher Fiction Fridays on my blog sport 200 or 100 word flash pieces based on a picture myself or the admins have chosen. Right now, because my well is a little dry, I have been raking back over all these tiny snippets for stories that can and should be extended into short stories, novellas or even novels.

Is there anything else you’d like to tell us about your process or about GENTLEMAN before we share your sexy excerpt?

Remember, you have control. You can get off this ride at any time by closing the book, but if you do, you won’t get to the satisfaction of seeing Harrold find what he is looking for and become what he is destined to be. 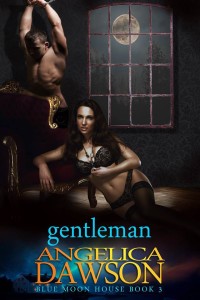 Harrold lives an empty life. He has no joy in his marriage, no love of his work. His only reprieve is found at the hands of the whores, the ones he pays to beat and debase him. Upon being accepted into Blue Moon House, he learns the real cost for his desires, and what underlying need is really aching to be filled.

After an evening entertaining Veronica’s friends, Harrold longed more than ever to visit Blue Moon House. In their room, he changed jackets, planning to do just that.

“Could you have rushed them out the door any more quickly?” Veronica asked while Polly unfastened necklaces and earrings, placing the jewels safely in their box. Even that reminded him of what he was missing.

“I’m sure I might. Was I impolite? They were making their farewells.”

“You are just in a hurry to return to the arms of your whores.”

“Can you blame me?” he asked, exasperated. “Yours are closed to me.”

She stood in only her corset, which Polly was unlacing.

“Leave us,” Harrold ordered, dismissing the maid and admiring his wife. It was one of the few pleasures she gave him. He would enjoy it.

Veronica clicked her tongue. “She hadn’t unpinned my hair.”

Harrold shed the jacket he had just put on and strode to his wife. He pulled the pins from her dark curls and let them fall, one by one, to her bare, pale shoulders. As he did, he kissed her nose, her cheek. He avoided her mouth until the job was done, a pile of pins on the table. Then he combed his fingers through her hair, making her sigh. Reaching an arm around her, he took the laces to her corset, freeing her breasts.

“Go on,” she said, pushing on his shoulders.

“Have I hurt you?” he asked, pressing his lips to her collarbone.

“No. Why do you keep trying?” she asked.

“Because you are my wife. I’d rather enjoy our years together than endure them. Because the mere sight of you pleasures me, and I would pleasure you at least as much.”

She sighed very quietly. “You know, I believe that is the first time you have said it so honestly.” Her expression fell. “You have never been able. Even your most gentle kisses feel wrong.”

“Why?” he asked, pulling her nightdress over her head and sitting beside her on the bed.

“I think I finally know. You must promise not to punish Polly.”

He frowned, confused. “Why would I—?”

“I noticed her touch when dressing me.” A flush crept into her pale cheeks.

Harrold smiled and put his lips to Veronica’s. They were trembling. “I’m not a woman,” he said.

He laughed and hugged his wife. “Fear not, my wife. I wouldn’t shun you for that. Though I do wish we had stumbled onto the solution sooner.”

She flushed even deeper and snapped. “Why? So you could watch?”

He grinned. “Among other things.”

You can find GENTLEMAN at Naughty Nights Press, AllRomanceEbooks and Amazon. For the month of January, you can also pick up the original Blue Moon House for only $0.99.

Look for more excerpts from Angelica’s work-in-progress on Angelica’s blog.

Angelica is active on Facebook and Twitter, and contributes flash fiction to several blogging collectives. She has also written two short stories, “The Highest Bidder” and “Leave Taking” which were each included in anthologies. Angelica has been writing for several years and having sex a lot longer than that. She is a wife, mother and environmental consultant. Her love of plants and the outdoors is not diminished by the bloodsucking hoards – mosquitoes and black flies, not vampires. 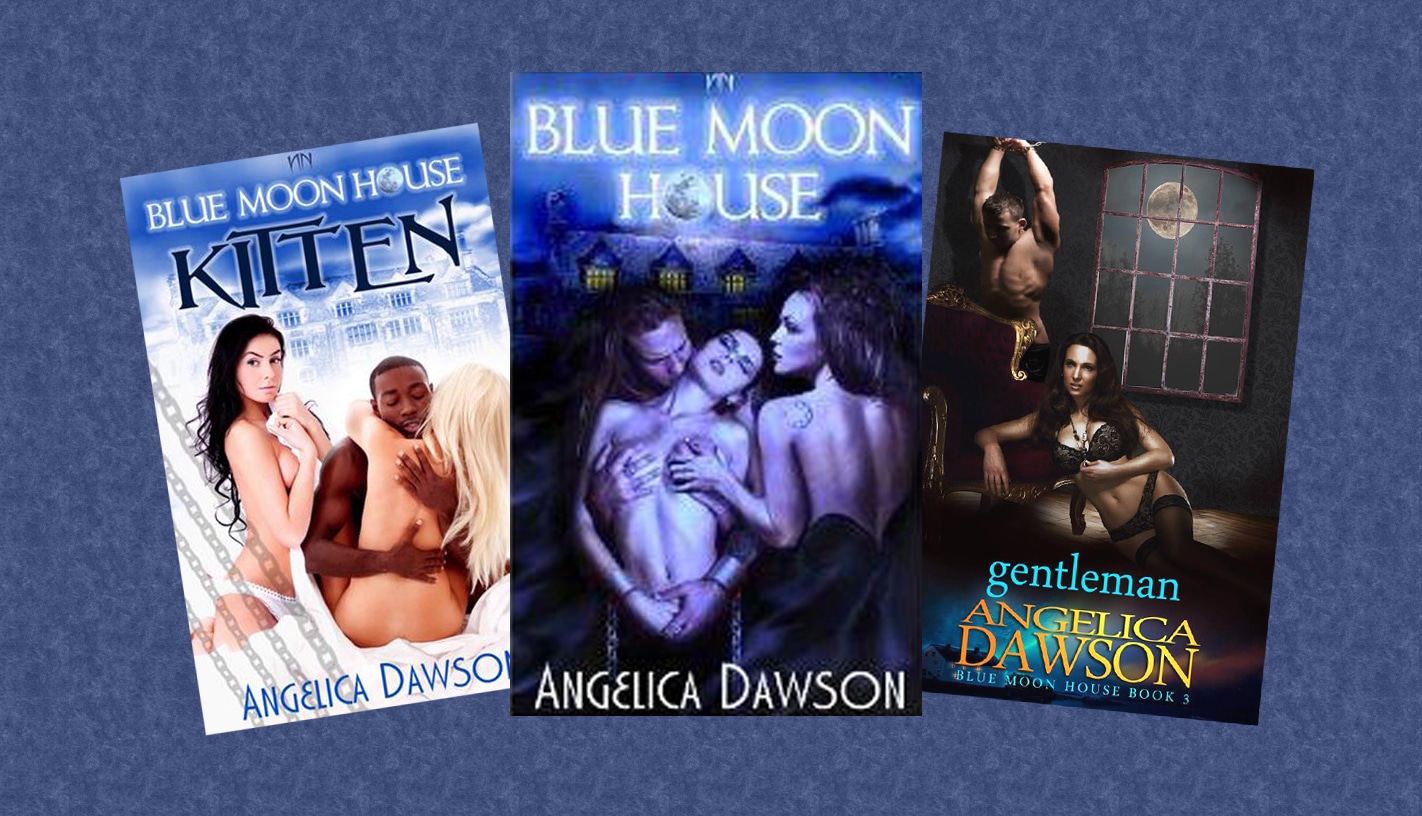 Article Name
Interview and Excerpt - Author Angelica Dawson - BLUE MOON HOUSE
Description
It is my pleasure to have erotica and romance author, Angelica Dawson as a guest on my blog today. She is the author of the dark and sexy vampire short, BLUE MOON HOUSE, which has been in the top ten best-selling titles at Naughty Nights Press for more than six months.
Author
Arla Dahl